President-elect Joe Biden is denouncing President Donald Trump as the “most irresponsible president in American history.” Biden warned that “incredibly damaging messages are being sent to the rest of the world about how democracy functions.” (Nov. 19) AP Domestic

WASHINGTON – Donald Trump is still trying to sow doubts about the election results, but planning already has begun for inaugural ceremonies in which Joe Biden is expected to officially become the nation’s 46th president.

But while planners of past presidential inaugurations have had to resolve complex issues like how to handle crowd control and security matters, organizers of the Jan. 20 ceremony are confronting an unprecedented challenge:

How do you safely stage a presidential inauguration in the middle of a deadly pandemic?

“Even in normal times, it’s a big job,” said Howard Gantman, who served as staff director of the joint congressional committee that oversaw Barack Obama’s first inauguration in 2009.

Next year, “it’s going to be really difficult,” Gantman said.

A look back: Joe Biden turns 78. Here's how old other presidents were on Inauguration Day 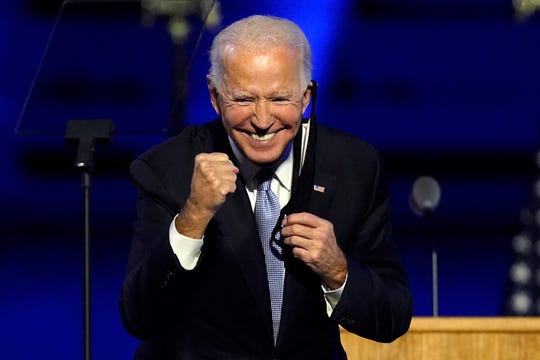 Presidential inaugurations typically are attended by hundreds of dignitaries – including former presidents, Supreme Court justices and members of Congress – while hundreds of thousands of spectators spill out across the National Mall to witness the ceremonies. The crowd at Obama’s first inauguration was estimated at a record-shattering 1.8 million.

Biden’s inauguration is likely to look far different than past inaugural ceremonies.

Planners are expecting the 59th Inaugural Ceremonies to be smaller than in previous years because of the health risks posed by COVID-19, which already has infected more than 11 million Americans and killed more than 250,000.

The question is how much smaller.

Organizers are committed to “traditional, safe and inclusive ceremonies” and are proceeding “under the direction that it is more feasible to scale down the plans than it is to scale up,” said Paige Waltz, spokeswoman for the Joint Congressional Committee on Inaugural Ceremonies, which is responsible for putting together the inaugural events to be held at the Capitol.

The committee is considering a number of health and safety precautions, such as face masks and social distancing, to protect the attendees, Waltz said.

‘You’ve got to have trust.' The strategy Joe Biden hopes will lead to agreement in a post-Trump era

Another proposal under consideration would require a COVID test for anyone who will be on the stage near the president-elect. In addition, the traditional inaugural lunch held after the swearing-in ceremony and attended by the new president and members of Congress may be moved from Statuary Hall in the Capitol to Emancipation Hall in the Capitol Visitor Center to allow more room for social distancing.

Other traditional inaugural events, such as the parade from the Capitol to the White House and a series of evening inaugural balls, remain in question.

Planning for those events is handled by the Presidential Inaugural Committee created by the winning candidate shortly after the election.

Biden’s office said this week it had no information to share on the selection of an inaugural committee or the fate of inaugural events under its domain but that details would be released soon.

Coronavirus strategy: A spiraling COVID-19 crisis will confront Joe Biden on day one. What’s his plan and how will he get it done?

There is precedence for dialing back the inaugural pomp and circumstance. Ronald Reagan’s second swearing in was moved inside the Capitol Rotunda and the inaugural parade was canceled because of bitterly cold weather in 1985.

Washington, D.C., Mayor Muriel Bowser’s office said it is awaiting guidance from the president-elect on whether the traditional inaugural parade would go on as usual next year.

“We are planning for a parade as well as the other elements of the inauguration traditions,” said John Falcicchio, the mayor’s chief of staff and deputy mayor for planning and economic development. “However, each inauguration reflects the person being sworn in, so we await the appointment of the Presidential Inaugural Committee to understand how we can support their vision.”

The District of Columbia has put in place COVID restrictions that limit most gatherings to 50 people. While most inaugural events are held on federal land, which means those restrictions wouldn’t apply, inaugural balls are often held at venues in the city that would be subject to the crowd limits.

Crowd control and enforcement of COVID restrictions would be less complicated at events like the swearing-in or inaugural balls because organizers could limit the number of tickets that are distributed. But an inaugural parade would be more problematic.

Besides the large crowd on the National Mall for Obama’s first inauguration, spectators lined up along the streets of Washington hours before the parade kicked off to jockey for a prime viewing spot for the procession down Pennsylvania Avenue from the Capitol to the White House.

“How do you do that safely – even with masks?” Gantman asked. “People have to sit right next to each hour for hours at a time.”

“It’s going to take a lot of cooperation,” he said.

Avoiding gridlock: Joe Biden and Mitch McConnell are friends who have brokered deals in the Senate: Can they still work together?

Meanwhile, a number of protests are planned in Washington to coincide with the inauguration.

Five groups have applied for permits with the National Park Service to stage protests. A group called DC Action Lab is planning a 5,000-person protest against the inauguration at various locations, including Lafayette Park across from the White House. Pro-Trump groups also are planning smaller demonstrations at Lafayette Park and other locations to offer prayers and support for the outgoing president.