Scott Farris, author of “Almost President: The Men Who Lost the Race but Changed the Nation,” describes the tradition of offering a concession speech. USA TODAY

WASHINGTON – When President Donald Trump signed off this week on formally allowing President-elect Joe Biden's transition to move forward, it was a decision he arrived at after a series of embarrassing setbacks in his efforts to challenge the results of the Nov. 3 election.

Though Trump made clear he intends to keep up his election legal battle, it was a turning point after conversations over the weekend with top aides about how he could approve a transition without conceding the race.

Trump faced dwindling prospects for overturning the election through the courts, a point driven home by a  decision in Pennsylvania over the weekend in which a federal judge dismissed one of his campaign's lawsuits as a “Frankenstein's Monster.”

White House officials speaking on the condition of anonymity said the government is preparing for Biden to take over Jan. 20, but the president made no direct reference to the election in two brief appearances Tuesday and continued to hammer away on Twitter with evidence-free claims of widespread fraud.

Facing mounting criticism from fellow Republicans, court stumbles, the certification of Biden's lead in several battleground states and internal squabbling over his own legal team, Trump was gradually talked by aides into acknowledging the need to begin a transition – an outcome that some close to the president predicted could be the closest he will get to a formal concession.

What history has shown us about contested elections and peaceful transitions of power. USA TODAY

“In the best interest of our Country,” Trump tweeted this week, he recommended that the official machinery of the federal government “do what needs to be done with regard to initial protocols,” a nod to beginning the transition.

Trump's acknowledgment that the General Services Administration should begin that process, which will allow federal agencies – including those battling COVID-19 – to interface with the Biden transition, was a break from his frequent assertions, leveled without evidence, that voter fraud robbed him of reelection.

Speaking for about a minute at the White House on Tuesday, the president touted growth in the stock market but did not address the election. He was similarly reticent hours later in the Rose Garden, where he honored the tradition of pardoning a turkey before Thanksgiving.

“And as I say, America First,” Trump said, repeating a campaign slogan. “We shouldn't go away from that.”

Trump campaign aides dismissed the significance of the transition announcement, and the president vowed on Twitter to continue his fight despite the series of setbacks undermining his case.

Friday, Michigan state lawmakers left a meeting at the White House saying they had seen no evidence indicating Biden's win was in error. The same day, Georgia certified the Democrat's narrow victory there.

The next day, a federal judge in Pennsylvania dismissed a Trump lawsuit as an amalgamation of “strained legal arguments without merit and speculative accusations.”

Sunday, Trump ordered his team to distance itself from attorney Sidney Powell, whose claims days earlier of an anti-Trump election conspiracy drew ridicule from across the political spectrum. By Monday, Michigan certified its election results.

A presidential tradition: If Trump still won't concede to Biden, he'll break more than a century of tradition

White House chief of staff Mark Meadows and counsel Pat Cipollone were among the aides who spoke with the president about the transition. Trump tweeted his announcement to go ahead minutes after the GSA wrote Biden to confirm the decision.

If Trump doesn't concede, he would break with 124 years of American history – which could rile partisanship and create divisions within the Republican Party. Trump and some aides see a strategy in continuing the fight. Some expect Trump to complain about the election for the rest of his public life, using it to retain a core group of supporters, raise money and perhaps make another presidential run in 2024.

Although Trump has no plans to call off lawsuits and election protests, aides said, Meadows wrote in an email to staff late Monday that the administration would “comply with all actions needed to ensure the smooth transfer of power.”

Trump returned to the lawsuits in a series of tweets Tuesday, asserting that “we are fighting hard.” He retweeted a message from about a week ago that “I concede NOTHING!!!!!”

Trump downplayed the significance of the GSA's announcement, saying the agency had been “terrific” and had “done a great job,” but it “does not determine who the next President of the United States will be.”

Rick Gates, a 2016 campaign aide to Trump, said the president's short-term goal is to get one or more of his election lawsuits before the Supreme Court, and there's no way to know when that might happen. Gates said he expects Trump to fight until at least the meeting of the Electoral College scheduled for Dec. 14 – and probably beyond.

“However,” Gates said, “with each passing day, the clock is narrowing his constitutional options considerably.”

Biden continued to roll out top level appointments, including several national security positions. In Delaware on Tuesday, Biden said he would nominate longtime confidant Antony Blinken as secretary of state and named Jake Sullivan, who worked for Biden when he was vice president, as his national security adviser.

Biden said he was “pleased” the administration was moving toward a “smooth and peaceful transition” of power.

“And as more states certify the results of this election, there's progress to wrap up our victory,” he said.

Trump and his team have filed lawsuits, demanded recounts and protested procedures in several states, an effort designed to throw out ballots or block certification of Biden's victories in Michigan, Arizona, Georgia, Wisconsin and Pennsylvania. Those initiatives have failed, and legal experts said there is little evidence of widespread fraud. 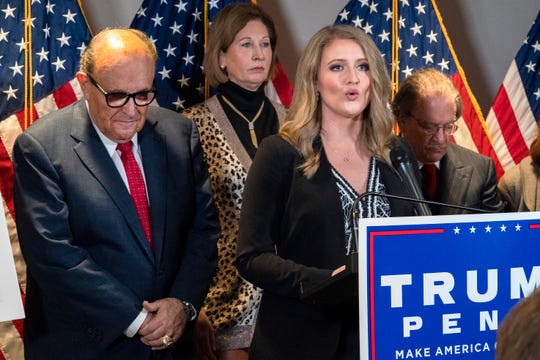 Trump is running out of battles to fight, a point underscored by an increasing number of Republican allies.

Minutes after Michigan certified its results, Sen. Lamar Alexander, R-Tenn., called on Trump to “put the country first and have a prompt and orderly transition to help the new administration succeed.”

In an op-ed for the Cincinnati Enquirer, Sen. Rob Portman, R-Ohio, said he has supported Trump's efforts, but “there is no evidence as of now of any widespread fraud or irregularities that would change the result in any state.”

An orderly transition is important, Portman said, and “it is now time to expeditiously resolve any outstanding questions and move forward.”

One sign of Trump's commitment to complaint: He canceled his Thanksgiving weekend at his Mar-a-Lago estate in Palm Beach, Florida, aides said, so he could be seen at the White House in charge of the election protest.

Trump took part in the annual pardoning of the national Thanksgiving turkey Tuesday, a lucky bird selected in an online election. In 2018, when a turkey named “Peas” triumphed over “Carrots” for the pardon, Trump joked that Carrots refused to concede and demanded a recount.

As he pardoned this year's turkey, Trump made no similar jokes.

“What we’ve endured and been able to endure, with the (coronavirus) vaccines now coming out one after another – it’s an incredible thing that happened,” he said. “But it's time to remember that we live in a great, great country – the greatest of them all.”